What to see on the Golden Circle

Often named as the "must-see" sights of Iceland, Geysir, Gullfoss, and Þingvellir make up the Golden Circle, giving a flavor of that Iceland is all about. The surroundings of these areas are also interesting, and less traveled by tourists, with bubbling springs, volcanic formations, and interesting bathing spots.

Flúðir Village and the Secret Lagoon

Flúðir is a small village not far from Gullfoss, in an area known for its geothermal activity. Located there is the so-called "Secret Lagoon", a hot spring that has been preserved as naturally as possible, whilst providing modern facilities. This is one of the oldest public swimming pools in Iceland, and has a truly magical atmosphere.

The Geysir Geothermal Area is the site of the original Geysir, one of the most famous hot springs in the world. It is the geyser from which the English word for this natural phenomenon of erupting water is derived. Geysir itself may be dormant, but there are many small bubbling pools in the area, and Strokkur, often referred to as the "younger brother" of Geysir, is extremely active, with breathtaking eruptions every 10-15 minutes.

Gullfoss, the great waterfall, meaning "Golden Falls", is a two-step waterfall on the river Hvítá, which is a glacial river running from the Lángjökull glacier. The waterfall drops 32m (105 ft) into a canyon, where Hvítá, one of the longest rivers in Iceland, continues its course. On a sunny day the sky will be filled with rainbows visible through the enormous amounts of spray rising up from the depths of the waterfall; this site of stunning natural beauty is truly a pot of gold at the end of the rainbow. 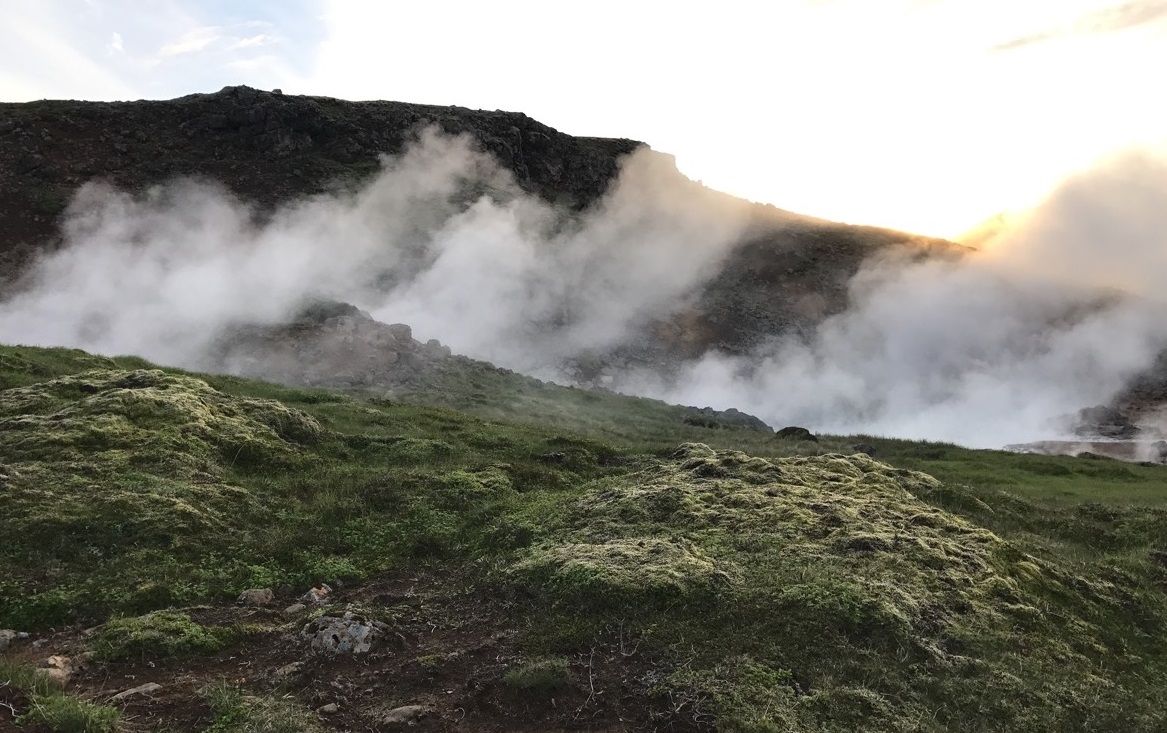 The hot springs of Hveragerði have truly shaped the surrounding village. Aside from being an amazing natural phenomenon, they have been harnessed for heating, cooking, agriculture, and horticulture. There are rather frequent but barely noticeable earthquakes in the area, due to Hveragerði's close proximity to the plate boundary. When approaching this area the distinct smell of sulfur can be found in the air, due to the sulfuric properties of the hot water in the springs. 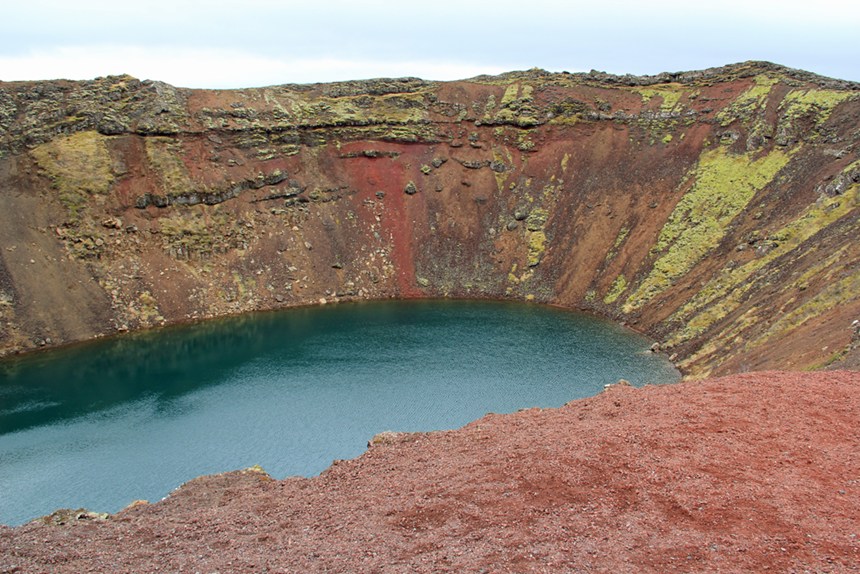 Kerið was formed about 6,500 years ago and lies at the northern end of a row of craters known as Tjarnarhólar. It is oval, about 270 m long, 170 m wide and 55 m deep: the depth of the water at the bottom varies between 7 and 14 m. You can walk right down to the banks of the water and around the perimeter of the crater. Although it seems the most likely explanation should be that Kerið is an explosion crater, this is not the case. Kerið is thought to be a scoria crater; a chamber previously full of magma may have collapsed during the end of its eruption to form the unique basin. 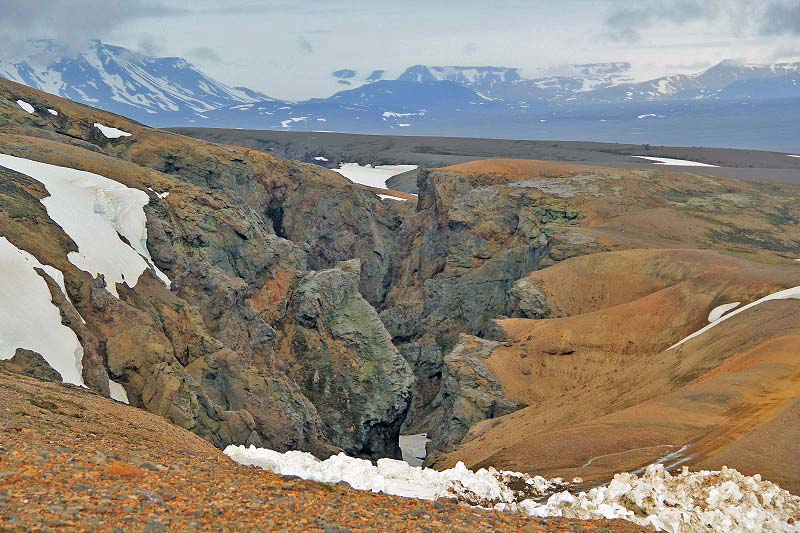 Kerlingarfjöll is a 1,477 m (4,846 ft) tall mountain range in Iceland situated in the Highlands of Iceland near the Kjölur highland road. They are part of a large tuya volcano system of 100 km2 (39 sq mi). The volcanic origin of these mountains is evidenced by the numerous hot springs and rivulets in the area, as well as red volcanic rhyolite stone of which the mountains are composed. Minerals that have emerged from the hot springs also color the ground yellow, red and green. The area was known formerly for its summer ski resort, but this was dismantled in 2000. Since 2000, Kerlingarfjöll has been operated as a highland resort, offering accommodation and food services to guests in the area. 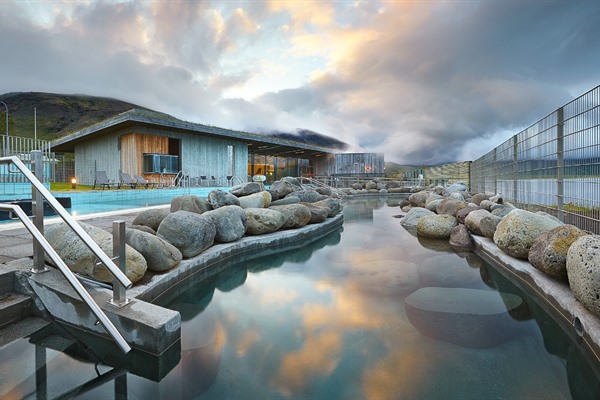 Laugarvatn is the name of both the village and the famous geothermal lake. There is a modern spa, the Fontana Spa, that takes advantage of the natural hot water of Laugarvatn. The baths vary in depth, size and temperature and the spa also features steam rooms, built over natural hot springs used for this purpose since 1929. You have the option of sticking to the man made pools, or you can take a dip in the lake itself, where the water naturally varies in temperature. You can enjoy the spectacular views from the sauna or the pools. There is also a restaurant and some guesthouses in the village.

The three valleys above Hveragerði are called Reykjadalur, Grændalur and, farthest east, Gufudalur. Grændalur takes its name (”Green Valley”) from the rich colours of its landscape. In Reykjadalur, Reykjavík Energy maintains a public shelter for walkers. Nearby, you can bathe in warm pools where hot springs flow into the river Reykjadalsá. Reykjavík Energy has signposted many walks through this area of geothermal springs and rich flora, and publishes a map showing the routes. Visit the Reykjavík Energy website for information about the Mt. Hengill area (www.or.is/english/).

Þingvellir National Park is a UNESCO World Heritage Site and is one of Iceland’s most fascinating places due to both its impressive geological formations and for the significant role it plays in the country’s history as the original meeting site of the Icelandic parliament, the oldest existing parliament in the world. At Þingvellir - literally "Parliament Plains" - the Alþing general assembly was established around 930 and continued to convene there until 1798. Major events in the history of Iceland have taken place at Þingvellir and therefore the place is held in high esteem by all Icelanders. Today Þingvellir is a protected national shrine. According to the law, passed in 1928, the protected area shall always be the property of the Icelandic nation, under the preservation of the Alþing. The Þingvellir area is part of a fissure zone running through Iceland, being situated on the tectonic plate boundaries of the Mid-Atlantic Ridge. It boasts a unique and magnificent biosystem, with beautiful geological features, such as the lake Þingvallavatn. Please note that there is a fee for parking in Þingvellir National Park. It is 750 ISK for a private car.

Tours that visit this area This Iceland Ring Road Trip is popular for a reason. Availability is guaranteed as itinerary and… The Northern Lights or Aurora Borealis are an enchanting spectacle in Iceland’s skies. When you see… The Golden Circle is a fascinating experience, and it encompasses many of Iceland’s most famous land…

...they met every item on our wishlist.

We recently returned from a 10 night Ring Road tour of Iceland and we had a fantastic vacation.
All of the arrangements that Nordika Travel set up for us worked out beautifully. We enjoyed all o